Hungary is a country in Central Europe, spanning 93,030 square kilometres in the Carpathian Basin. The population is just under 10 million. Hungary joined the European Union in 2004 and has been part of the Schengen Area since 2007. The official language is Hungarian, the currency is the Hungarian forint, but euros are also accepted in many places. Payment by card is possible in most shops.

Hungary is an OECD high-income economy and has the world’s 54th largest economy by nominal GDP, and the 53rd largest by PPP. It ranks 45th on the Human Development Index, mainly due to its social security system, universal health care, and tuition-free secondary education. Hungary’s rich cultural history includes significant contributions to arts, music, literature, sports, science and technology. It is the thirteenth-most popular tourist destination in Europe. In 2017 15.8 million international tourists visited attractions such as the largest thermal water cave system in the world, the second largest thermal lake, the largest lake in Central Europe and the largest natural grasslands in Europe.

Budapest is the capital of Hungary with 1.750.000 inhabitants – the ninth largest city in the European Union. 35% of Hungary’s population (3.3 million people) live within the Budapest metropolitan area. The city has a 2.000-year long history. The central area of Budapest along the Danube River is classified as a UNESCO World Heritage Site including several notable sites, such as the Hungarian Parliament and the Buda Castle. There are around 80 geothermal springs and the largest thermal water cave system in the world located under the city.Budapest attracts around 12 million international tourists per year and the city was chosen as the Best European Destination of 2019.

The city of Székesfehérvár with 100.000 inhabitants is Hungary’s ninth largest city. It is located only 60 km / 45 minutes away from Budapest. Székesfehérvár held a central role in the Middle Ages as a royal residence and as the capital of the Kingdom of Hungary. The first kings of Hungary were crowned and buried here. Castle building remained a living tradition: the Bory Castle on the outskirts of the city was hand built in the 20th century and welcomes visitors. Székesfehérvár is a central hub of Hungarian sport with iconic clubs like Videoton (football) and Alba Volán (ice hockey).

Velence is a small town and a holiday resort with 5.500 inhabitants, at the northeast tip of Lake Velence and at the foot of the Velence hills. Obviously, its main attraction is the lake itself: it is Hungary’s third biggest natural lake that covers an area of 26 km2. It is one of Europe’s warmest lakes with an August water temperature of 26°C (due to its average depth of only 1,5m). Budapest is only half an hour’s drive away.

The Event Centre will be located in the Entz Ferenc Agricultural Secondary School (47.242581, 18.647742) in Velence. The school has big halls for registration and a huge parking area for buses inside the complex. It will also serve as the organisers’ headquarters. There is plenty of space for meetings and exhibitions. The Event Centre is only 2 mins from the nearest exit of the Budapest – Székesfehérvár – Balaton motorway (M7). Lake Velence with an open-air bath and a huge campsite is just a 10-minute walk away. Most Event Centre services shall be accessible online throughout the event to insure COVID-19 compatible operations. 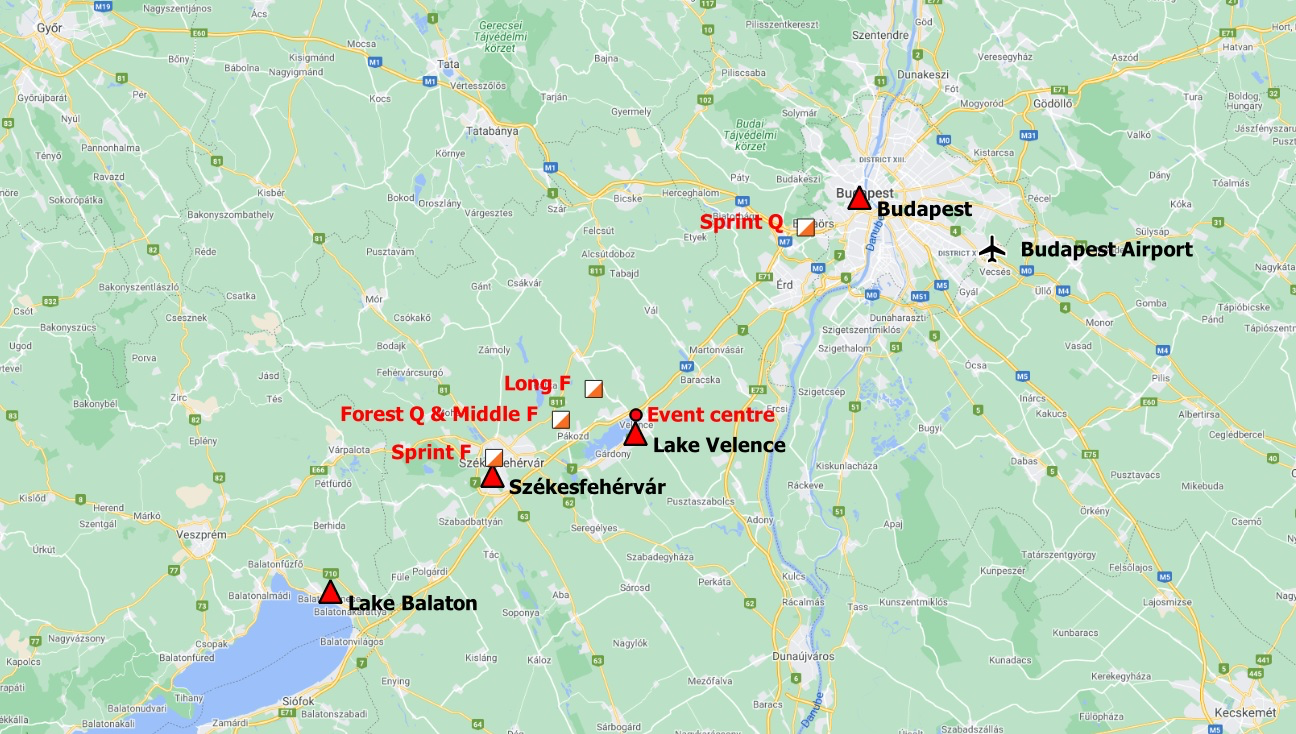 Travel distances by car from the main accommodation hubs

Embargoed areas and old maps are shown on the WMOC 2021 webpage:
http://wmoc2021.hu/embargoedareas